Triangle School was south of Vermilion, east of Highway 41. The district lies in the angle between Grizzly Bear Coulee and the Battle River, hence the name—Triangle. The district was formed in 1918 but there were not enough school age children until 1927. When the school closed in 1954, the children were bussed to the new Preston Central School. At that time the building was sold to the Tolland Community and moved across the coulee, where it is still used as the Tolland Community Hall.

A small sign with a picture of the school had been put up a few years ago by former students, Jeff Martin and Willie Clark. The new sign was put up beside it. This sign was the fourth one of the afternoon for Doug Westman, Jim Dibben and Ryan Gibson. Thanks guys. 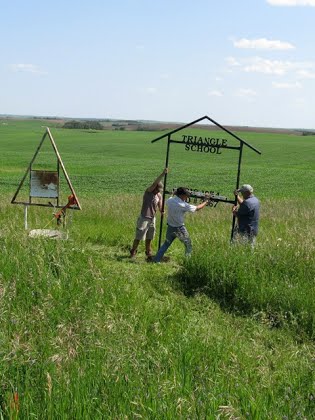