Rye is another school named in honour of an English home town. There are no buildings left at the site north of Dewberry, however, the trees in the shelterbelt must have multiplied many times. The site had become its own little forest.

Maxine Holmen, a retired teacher from the area, had organized the day with five signs scheduled to go up…a very ambitious agenda.

Rye was the first one. You can imagine the thrill we had when at 9 am we came over a little rise and saw the trucks, cars and people already there.

The sign went up quickly. Pictures and visiting followed. Some of the group followed along to join in putting the next sign(s) of the day.

The building was gone, but community spirit was certainly still alive. So much so, that before the day ended people returned to paint the sign white so it stood out more against the trees. 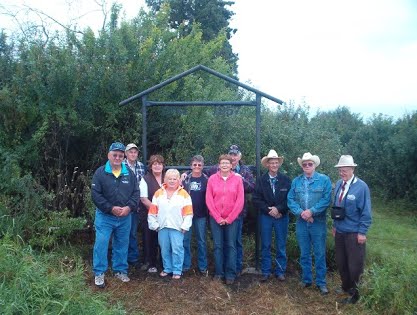