This school was a few miles south and east of Vermilion. Mr Hobbis, who donated the land for the school was given the privilege of naming the school. He named it Optimist from the “spirit of optimism then prevailing”. Unfortunately that building burned in 1941.

Later it became an extension of the Vermilion United Church when Sunday school classes were held there. The Optimist school served as a classroom again in 1965-66, when it was moved to Tulliby Lake after the burning of the Tulliby Lake Central.

A small group of people met on June 24, 2008 and joined us in celebrating the sign and sharing memories. Don Frederick was interested in getting the school site marker. He cleaned out the trees in preparation for sign placement. He was “almost” surprised when he found a rock pile awaiting him under the growth of the trees. He’s sure that he can arrange them in an ornamental fashion around the sign! 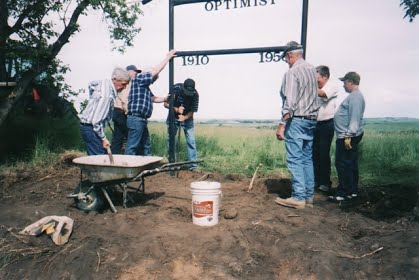