Situated on top of the river hill on the south side of North Saskatchewan River, the Lea Park site was the most picturesque of the day.

The school itself was a lovely log building that complemented its beautiful setting. However, it no longer is at the site. When the school closed, it was moved to Blackfoot and became a residence. But the scenery from that hill still holds you in awe.

In the late afternoon of August 9, 2007 an interested group of former students plus family and friends met at the school. A very busy highway runs past the site—a reminder that it was 2007 and that there have been plenty of changes in the almost 50 years since the school had been there.

Following the installation of the sign a pot luck supper was held in the Lea Park Picnic Grounds. The group included quite a crew, who had been at all five school sites that day—Rye, Greenlawn, North Home, Riverton and Lea Park. Special thanks to Maxine Holmen, who coordinated the day’s schedule. 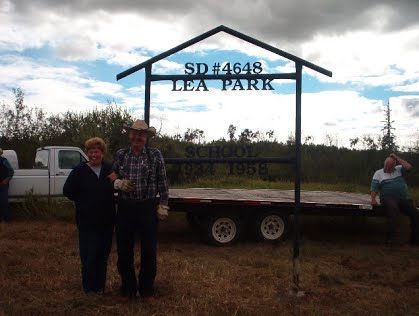