Named for the Cheviot Hills in England, this school is found in the hills of the Paradise Valley area. The building was sold and moved from the site many years ago.

On a warm afternoon in July of 2007, three members of the Brassington family—two who had attended the school–met at the old school site. The installation took effort as the sign, an auger to dig the holes, the wheelbarrow and cement had to be hauled by hand up a steep incline not accessible by vehicle.

However these people were not easily daunted and the job was done. They were well prepared for the second sign of the day at Uneeda, where their farther had attended school. 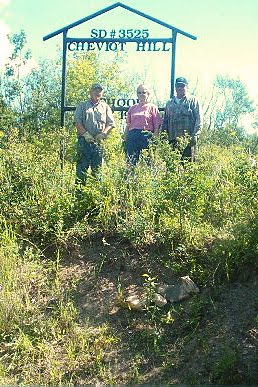