Basswood is south of Vermilion. The need for a school in the Basswood district as late as 1930 was because of the Hudson Bay Settlers and Soldier Settlement families who came to the community in 1926 and 1929. The School was sold to the community association and was then sold to the Preston Community Centre.

Doug Westman, Jim Dibben and Ryan Gibson were the work crew. They quickly prepared the site and erected the sign very close to where the gate to the school had been. The extremely busy highway beside the site forms quite a contrast to the type of traffic that would have gone by in the days of the school. Jim Dibben had been a student at the school. Dorothy Westman, another former student, also came over and had her picture taken at the sign. 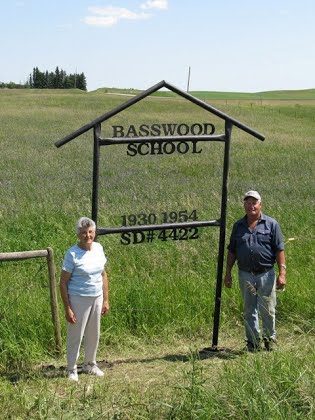