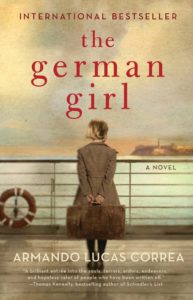 This book is a historical novel written by the Cuban author Armando Lucas Correa. The story switches between Anna Rosen who is a twelve-year-old girl living in New York and her aunt, Hannah Rosenthal, both who are Jewish. The novel covers a period of 70 years. The story tells of the aunt’s experiences living in Nazi-occupied Germany in 1939. The novel is in four parts and is about the lives of both and how they intertwine. It is a tale of tragedy, devotion and hope.