FRTA is pleased and proud to present Garry with an ARTA volunteer award this year. If you have been at any ARTA meetings during the last ten years, you will recognize Garry Hoffart’s face!

This people-oriented extrovert has been volunteering in his community and church since he was a teenager, then later in his professional career, and finally throughout his retirement. Over his many volunteering years, Garry is consistently able to see through a situation to its bones and sees what needs to be done. While others are presenting and talking, he is listening and constantly asking himself “Is this course of action efficient? Is there a better way to do it?” He can always gather people around a project and get donations to complete the job, whether physical materials or groups of people were needed. Garry is confident in getting the job done, whatever it is!

In high school, Garry was president of the Catholic youth organization at his church, and the priest told him about a woman who had left an abusive situation and was planning to live in an unimproved metal granary for the winter. Garry found donated materials, the youth to help, and had an appropriate shelter built for the woman after only one weekend of work.

Professionally, Garry was in the classroom for nineteen years and an administrator for twelve. He started the hot dog program at one of his first schools, as well as the outdoor education program. He often took student teachers and is very proud of his cooperating teacher role over the years. He was the facilities chair for the Palliser District Teachers’ convention and an EPC representative at the ATA local level for many years. He worked on the science council, helped establish the Chinook County science fair, and worked on the Canada-wide science fair council.

While doing all this professionally, he had a young family. Garry worked tirelessly for the Active 20-30 Club in High River and for the High River Scouting movement, even building structures at Silverland for all to use. My personal connection with Garry was as President of our private kindergarten in High River. Garry helped to keep our wonderful program viable and meeting the needs of young children. He and his family even had a whole acreage of animals for field trips with our classes to see farm animals up close. Even with all of these activities, Garry still worked with his church in various ways and helped neighbours by running programs like the youth soccer program. As Garry’s family grew and he moved toward retirement, his volunteering activities in the town of High River and in the Foothills area continued to add up and are just too numerous to mention — from working with classic cars to local parades, setting up Christmas displays in the local park to being a golf course marshal. The list is endless, it seems.

Garry retired from Foothills School Division in 2007. He then had even more time to help others and worked hard to establish a cooperative senior’s residence called Abbyfield House on the same spot as the private kindergarten he once helped support. He quickly joined with the other local retired teachers in FRTA and was president for two terms. With his feet wet by FRTA, Garry joined the Health and Wellness Benefits Committee of ARTA — now the Health Benefits Committee — and chaired this committee for ten years. He then ran for an ARTA Vice President Position and won but will have to give this up as he moves to British Columbia on the next part of his journey.

When asked about what has been most meaningful for Garry over his volunteering history, he said “the People!!” He’s known since adolescence that he has a “people connection” — making people happy makes him happy. This is what he will miss the most when leaving High River and ARTA.

Garry is now set to fully retire — from work and from volunteering. He and his wife are moving to Salmon Arm, B.C., to be closer to family, and also so this prairie boy can wake up every day looking at a lake. He wants to do more gardening and work with the local Rotary Club (so maybe not fully retired!). High River will miss him, FRTA will miss him, and ARTA will have another role to fill when he leaves. Thank you, Garry, for all your hours, organization, and expertise! 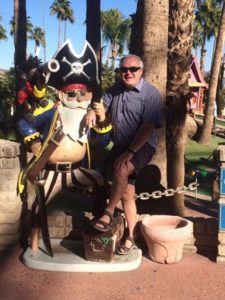