Family and friends, including a number of OKARTA members gathered on March 14 at St. George's Anglican Church in West Kelowna to celebrate Ron's life. Ron served his country, his students and staff, and his fellow retired Alberta teachers with courage, wisdom, humour and dignity.  Ron's obituary is found below along with photos from his memorial service.  Ron will be sorely missed by his fellow OKARTANS. 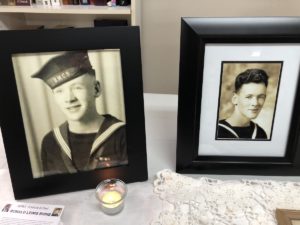 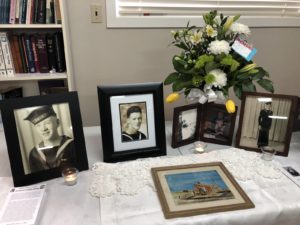 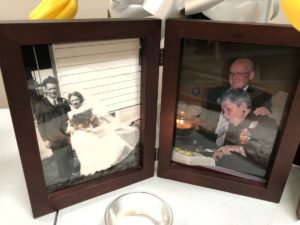 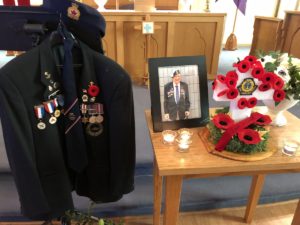 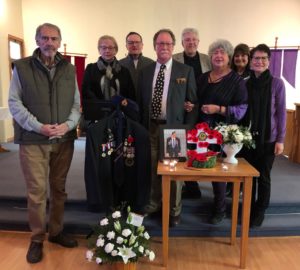 Ronald Lewis Rhine passed away on Sunday January 12, 2020 at the age of 94 years old after a prolonged illness. Ron was predeceased by his wife of 64 years, Kathleen Caroline Rhine (nee Ede) and by his sister, Florence Armstrong of Okotoks, Alberta. He is survived by June Ranger, a half-sister who resides in Red Deer County, and by his 3 children: David and his wife Shonna, his son Van and his daughter Louanne. Ron had 4 grandchildren: Geoffrey Rhine (Jessica Leeworthy), Arden Hicks (Riley Hicks), Brett Rhine (Shanaya Rhine) and their daughter Rowen, and Carter Rhine.

Ron was born in Calgary, Alberta in 1925. He lived in various southern Alberta communities as a youngster dependent on his parent’s (Lewis Ruddle Rhine and Ethel Mary Rhine)) work location. Eventually the family settled in Okotoks, Alberta where Ron completed his schooling. In December 1943 Ron enlisted in the Royal Canadian Navy serving as a radio operator/coder in the 65th Canadian Motor Torpedo Boat Flotilla under the command of Lt. Cdr. KRH Fitzpatrick, for whom he had an enduring respect and admiration. Ron’s war experiences were kept close and secreted up to his death and had a damaging impact on his health in the form of severe PTSD which troubled him until his death. At the completion of WWII, Ron returned to Southern Alberta. He met, Kathleen Ede at the Nanton skating arena, asked her for coffee and their romance blossomed. Ron and Kay were married in 1946, and almost immediately moved to Edmonton where he enrolled at the University of Alberta, completing his Bachelor of Education 4 years later. His first teaching job was in Sunnynook, Alberta where he was the only teacher for Grades 9 to 12. In Sunnynook, Ron and Kay started their family with the arrival of David J Rhine in 1952. In 1955, another son arrived, J Van Rhine and their third child, Louanne M Rhine arrived in 1958. By then the family had moved to Edmonton, Alberta where Ron accepted various teaching and administrative jobs, leading to many postings as Principal in Edmonton public schools regarded as difficult to manage. Ron established a reputation for being able to “straighten out” these difficult schools and continued to do so until his retirement in the late 1980’s. At the same time, Ron completed a Master’s in Education degree.

Ron was very active outside of his profession. He held leadership positions in amateur sport (Edmonton Little League and Edmonton Minor Hockey), served as Chairman of the Yellowhead Planning Commission, mayor of the Summer Village of Lakeview on Wabamun Lake, and President of the Alberta Teacher’s Association, eventually re-organizing and leading the Alberta Retired Teachers’ Association (ARTA). He was active in the Naval Veteran’s Association, in both Edmonton and Kelowna. Ron loved to dance; Ron and Kay were enthusiastic members of Les Amis while in Edmonton. As a couple, they were very social and entertained a steadfast group of friends (the Dunns, Thorsleys, Crawfords and others) at Grey Cup parties, birthdays and anniversaries. Ron and Kay maintained a cottage at Wabamun Lake, spending as much time there as possible. They loved to camp and introduced their children and grandchildren to the adventure of car camping and the exploration of new places.

In 2001, Ron and Kay moved to West Kelowna. Ron continued his community work, establishing the Okanagan chapter of ARTA and taking on leadership roles in the local branch of the Naval Veteran’s Association. Kay and Ron were active members of St. George’s Anglican Church in West Kelowna, a continuation of their lifelong involvement in the church. Ron loved to sing and was an active choir member relishing his participation, especially the Christmas Eve service.

Kay became ill with Parkinson’s disease and for the last 7 years of her life resided in a long-term care facility. Ron visited her every day, often more than once-a-day until her death in 2015. Ron then moved from their West Kelowna home into assisted-care, remaining active in all his interests, and continued to drive until December of 2018. A continuing interest for Ron related to Remembrance Day, when Ron annually sold poppies with enthusiasm and spoke frequently to schoolchildren about WWII. In the last few years of his life, Ron developed a close friendship with Dolores Leming who became his near-constant companion. When Ron moved into a long-term care facility in June 2019, Van and Dolores were able to visit and assist him almost daily.

Ron’s last year became a series of admissions to the Kelowna General Hospital following a minor car accident in December 2018. Eventually it became clear that Ron had cancer, and because of this his health gradually, but comfortably, declined. On Christmas Eve, he received communion and was anointed; with joy, he met and held his great granddaughter, Rowen who was then 7-weeks old. From Christmas Day on, Ron’s health declined, although he remained comfortable and aware of those in his presence. He died at 13:40 hr on Sunday January 12th, at peace.

Ron/Dad, you were loved and admired. You are missed and will not be forgotten.